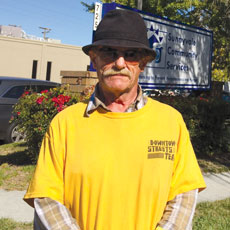 Two years ago, Patrick and Sandra had to move out of their Sunnyvale apartment when the rent went up more than 25 percent. For a while they tried staying in motels, but that was also too expensive, so eventually they set up camp in a local park in Sunnyvale. They officially became homeless on their wedding anniversary. “I served two tours of duty in the Air Force. I never thought my wife and I would be homeless,” said Patrick.

Patrick and Sandra had been living in the park for a month when Sunnyvale Community Services’ Case Manager David Hernandez approached them. Gradually, Patrick and Sandra trusted our staff. SCS provided food and sleeping bags and secured a motel voucher funded by Santa Clara County during the cold weather. With secure shelter, SCS helped the couple work on their goals to find stable housing. SCS linked them with Downtown Streets Team (DST). With DST helping the couple manage their appointments, SCS helped the couple find an affordable home. At every step, Patrick and Sandra consistently followed up with their case managers, filled out applications, went to meetings, and did everything they needed to do to secure an income and find a permanent home.

“I served two tours of duty in the Air Force. I never thought my wife and I would be homeless.”

Thanks to Patrick’s veteran status, SCS enrolled the couple in the new Supportive Services for Veteran Families (SSVF) program funded by the Veterans Administration. SCS staff was with them when they signed their lease and walked over the threshold of their new home.

Patrick and Sandra are still active with SCS. The couple signed up for the senior food program and “Challenge Diabetes,” a wrap-around program through a partnership with El Camino Hospital District and Second Harvest Food Bank that helps people like Patrick prevent or manage diabetes.

Now that Patrick and Sandra have a home, they are doing what they can to give back. “Now it’s time for me to help others—it’s their turn now—people who are just like me who need a little help,” he said.

We are grateful to the community for your continued support and generosity.

Donations are accepted at the side door in our parking lot.

Important: Please note that we do not accept used items, or packaged food donations that are opened or past their expiration date. Thank you!

This website uses cookies to improve your experience while you navigate through the website. Out of these cookies, the cookies that are categorized as necessary are stored on your browser as they are essential for the working of basic functionalities of the website. We also use third-party cookies that help us analyze and understand how you use this website. These cookies will be stored in your browser only with your consent. You also have the option to opt-out of these cookies. But opting out of some of these cookies may have an effect on your browsing experience.
Necessary Always Enabled
Necessary cookies are absolutely essential for the website to function properly. This category only includes cookies that ensures basic functionalities and security features of the website. These cookies do not store any personal information.
Non-necessary
Any cookies that may not be particularly necessary for the website to function and is used specifically to collect user personal data via analytics, ads, other embedded contents are termed as non-necessary cookies. It is mandatory to procure user consent prior to running these cookies on your website.
SAVE & ACCEPT
Scroll To Top